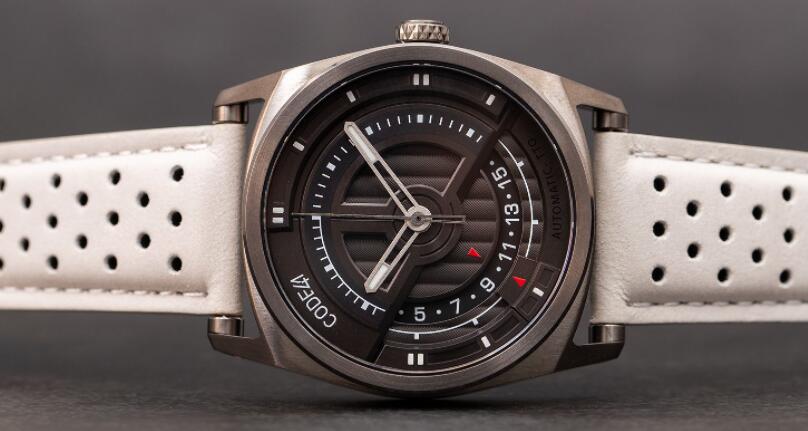 CODE 41’s latest watch is the logical evolution of the Anomaly series that started it all for the Swiss newcomer brand in 2016. After almost five years on the market and over 15,000 pieces sold, Code41 Anomaly Evolution has now combined the strengths of the two collections to create what is arguably the best ANOMALY watch ever to date.

The novelties are now available for pre-order. You can find the link here: to the Code41 Anomaly Evolution .
If you ignore the dial for a second, you might think that the ANOMALY-01 & -02 watches are one and the same model. In fact, both cases rely on the same futuristic and almost industrial-looking design language.
The ANOMALY-01, however, presents itself much more extroverted and loud, not least due to the partially skeletonized dial and the somewhat unconventional time display. Inside the case, you find the Japanese automatic caliber Miyota 82S7, which gets the job done without any problems, but – to put it casually – is nothing special.

The ANOMALY-02, on the other hand, relies on a much more reserved and conservative appearance, but boasts a date complication and an improved performance (due to the Swiss ETA 2824 used). Those who wanted a mix of both have been put off so far, though.
This changes with the new Code41 Anomaly Evolution models, whose cases are available in either 38mm or 41.5mm diameter. However, these not only combine the elements of the predecessor references, but also add some improvements to them, which were developed in cooperation with owners of the 01 and 02 versions.

In general, the workmanship of the case is impeccable for a watch in this price range. The corners and edges have a pleasant touch to them, but are still worked sharply enough to clearly accentuate the boundaries between the different surfaces.
The hexagonal lug screws seen here definitely help the watch look more “tooly”, but are only decorative in nature. For an on-the-fly strap change, CODE41 has equipped the leather straps with quick-change spring bars instead.

To achieve a snugger fit, the case height has been reduced by 1.5mm compared to its predecessor, resulting in a new case height of around 11mm. Sure, that may not sound like much at first, but on the wrist the watch now wears significantly less top-heavy. Despite the flatter case, CODE41 has also managed to make the watch more durable. Thanks to a reinforced (although not screw-down) new crown, the Anomaly Evolution is water resistant to 100m.
If the dial of the ANOMALY-02 line was too plain for you, then you might be a fan of this new edition’s revised dial. This is because it is worked in several steps or levels, which gives the eye a lot to discover due to the plastic depth. In the center, the finish reminds us of the Côtes de Genève look, which is typically used on plates and movement parts, but apparently also looks great on a dial.
Even though the ANOMALY-1 series enjoyed great popularity due to its design, it was obvious that the design would be the main focus, but less so the performance. However, Code41 Anomaly Evolution has once again listened to the community and taken their concerns to heart. As a result, the brand now relies on the well-known Swiss Sellita SW200-1 movement for its latest ANOMALY iteration.
While the Miyota movement only has a frequency of 21,600 vibrations per hour (or 3 Hz), the Swiss counterpart now in use oscillates much faster at 28,800 vibrations per hour (or 4 Hz). This not only results in a smoother gliding of the second hand, but is also clearly noticeable in everyday use: While the Miyota has a daily deviation of -20/+40 seconds, the Sellita movement (in its elaboré version) is much more precisely regulated to -7/+7 seconds per day.

Another new feature is the revised date display. It is no longer located at 3 o’clock, as it was the case on the ANOMALY-02, but moved to the 7 o’clock position. Two red indicators now indicate the date, which looks as follows:
The brand-new Anomaly Evolution is now available for pre-order at CODE41. Prices start at 893.00 € for stainless steel watches on leather straps, but can be slightly higher in case of PVD-coated cases or if you would like to get a stainless-steel bracelet with it.